There comes a point in an Interns life, when he has to give up on his food. Not generally all foods but his favorite food. His one guilty pleasure. The kind of food you would rather skip lunch, when your woman tells you that is what’s for supper in the evening. Food that you would most definitely have for a week and don’t feel like you need a change of diet or have a stomach upset. Food that you would feel no harm having it for breakfast, brunch, lunch and most definitely supper, heck food you could even have for month. Food you would have dreams about, beautiful haunting dreams. If you have that food, you feel me? Don’t you? Yes?

If you don’t have that food, then there are only two reasons behind that , one you should probably be 4yrs old and haven’t figured your taste buds or two you’re not living my friend you only exist. Get that food my lads, it’s out there somewhere looking for you and you looking for it.

Give me a plate of rice and beans any day and you are one friend that I will keep close, closer than a brother. (Ha! Ugali? Ugali my apps. Ugali is a no, no.) Serve me anything that has rice in it and you’re a friend I’d put in a good word for, we’ll be partners in chyme. Love partly brought about by living in the coastal town for as long as I could learn to sing my ABC’s and also I have loved anything that comes with rice since time immemorial. Mombasa added icing to the cake. I mean you come down here and see how rice gets entangled in a smorgasbord of meals and you’ll left wondering “Should I stick to the normal Ugali skuma?”.  I for one have loved rice to have had dreams about it, beautiful haunting dreams. I have woken up chewing something which I dreamt would be rice. Ya its that good. 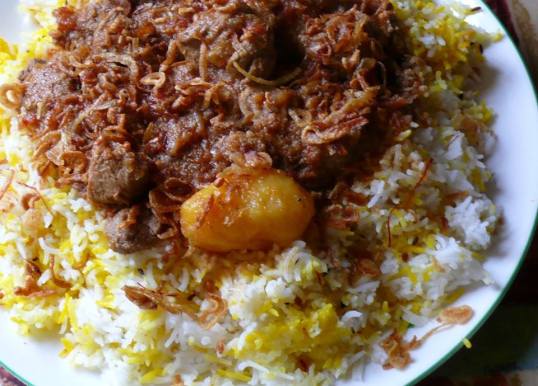 I mean that first sight. Oh what a sight for sore eyes. The rice. That fluffy, light green, white and yellow colored rice is food for your eyes, and the banana garnishing saliently placed on the plates side, waiting for the aftermath of Biryani, once you start munching away. And the first bite. Oh what heaven that first bite is. The gravy coated rice and a patty of ground beef resting gently on your tongue, flavors mingling in a seductive pas de deux and then, the Kachumbari; a slice of tomato and onion swirling in your mouth breaking apart and combining again in a fugue of sweets and savories so,,, delightful. Then the sweetest yellow banana from Kisii to climax the meal. My lads this is no mere colored rice, meat gravy and banana? This is God, speaking to us through rice. Ya my love for rice is that serious, but tragically it has to end. Here’s why.

Mr. Jameson and I recently visited the capital for some geek shindigI won’t indulge you in that…. for now. So with it represented an opportunity to visit some relative’s uncles and aunts, to suffice this, the Extended Family. So I was ready for any invite. One came up, and I had the chance to visit a very good Uncle of mine served in the army, guys well built from the last time I saw him, that’s 10yrs ago, I was 10. You know time flies when you can hardly picture his face in your mind ever since the last time you two met. So it’s been eons on end, don’t look at me that way. Life happens.

He among others are the reasons, I’m calling it quits with this long rice food affair. So my aunt welcomes me, I say my hellos and proceed to the couch and take a seat, and the seats, seats so posh you would want to take them out to dinner (this is not about seats lets stick to the topic). I wait for him whilst I fiddle through my phone. So he comes in and looks at me squinting his eyes and exclaims how long it has been since we last met.He stretches out his hand for a handshake. I respond and dish out mine the palms meet and the sound that is made echoes the room. He holds my feeble phalanges firmly I could feel them going numb. He suddenly stops and says “No hiyo bado, Pok Odonjo!” I take a sigh of relief thinking the pleasantries were done with. While dog my cats that was just the beginning, we weren’t even half way their. He says that that’s not a proper greeting the hands didn’t lock, so he stretches his hand out again. I respond, also stretch put my hand. Our palms meet again and the sound made is twice as much as the earlier one. I’m sure anyone in the room would have thought it for a slap, this time I could feel my skin twitching in the inside (he says, “Sawa sawa”) affirmation that the palms have locked well.

He’s not done yet.So he then proceeds to shake it (my hands). Shakes it firmly. The firm handshake between gymnasts. Think Indian wrestle. He shakes it with vigor like affirming if I hit the gym (which I don’t). He shakes it expecting me to stand firm, but I don’t. I budge, I shake like a leaf on a branch swaying to the winds direction. I shake, I wobble I try to get my stamina back, but I don’t. I wobble I shake I could feel my feet almost slipping from the tiled floor. He shakes my hand I shake, this went on for 15 seconds until he finally He loosened his grip I regain ground and now I pretentiously shake his. He doesn’t move a muscle. I shake it with all my rice might but like a rooted tree he stands his ground. I try as much he stands there undeterred. He looks at me coughs a laugh, smiles and shouts to my aunt in the kitchen.

No, I think that wasn’t too bad. Don’t you agree? Yes? I take that back. I think I’ll just stick to rice. It could have been worse.